Yips Mental Coaching from Anywhere is the World LEARN MORE!

How To Know if You Have The Yips

How do you know if you have the yips or your throwing mechanics are off?

Well, most baseball players go through relatively similar stages during a bout of the yips. Can you identify with any of the following stages?

6 Common Characteristics of the Yips

Related Article: How Do The Yips Start in Baseball?

The Yips in Action

Rockies left-hander Tyler Matzek received a record-setting investment 3.9 million dollar after the team drafted him in the First Round in 2009… but accuracy problems have haunted the highly-touted prospect.

The throwing yips are the most likely cause of Matzek’s failure to locate his pitches. Since Matzek had a good 2014 season, the issue is probably more mental than mechanical.

Matzek began the 2015 season in the Rockies starting rotation but walked 19 batters in 22 innings.

Matzek was quickly sent down to Triple-A Albuquerque, after just five MLB starts where he moved to the bullpen. Pitching out of the bullpen, in mostly non-pressure situations, Matzek pitched 10 innings, gave up 4 runs, recorded 13 strikeouts and walked 10.

Matzek’s anxiety about pitching led him to leave the team so he could go home to work on his mechanics with his high school baseball coach.

Matzek believes the main cause of his pitching woes is mental and he feels a great deal of anxiety when on the mound during games.

MATZEK: “There is a mental aspect that is getting in the way of my mechanics. I’m honestly not even sure. Some mental things that happen to creep in and I have to make adjustments. I felt a little bit anxious.”

Matzek has no problem pitching in practice which points to mental factors as the underlying cause of the yips… especially since game-time anxiety causes Matzek’s yips to rear its ugly head.

MATZEK: “I don’t think that it’s so much the yips. The yips, to me, would mean I wouldn’t be able to (pitch) in practice. I have had some mental demons that come up when I’m in a game. It’s something that throws my mechanics off.

Matzek doesn’t admit to the yips for a couple of reasons:

Try this tip to combat the yips:

Adopt a fresh approach – If your current strategy of focusing on mechanics has not worked, try something different. The first step to improvement is admitting that your mental game is a factor is your throwing problems, and it’s not a sign of weakness.

Look at your mental game, not making more changes in mechanics, not only can you beat the yips, but improve your overall baseball game.

Isn’t that why you compete in the first place?

Overcome Throwing Yips: How to Break The Yips Cycle 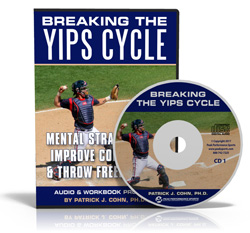 Do you (or a ball player) suffer from: 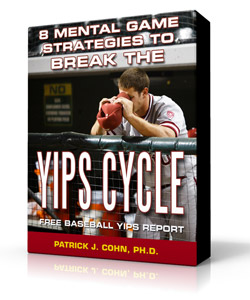 Do you throw accurately in practice, but lose control in games?

Learn how to over come the throwing yips!

Download our FREE Throwing Yips Report and learn how to break the yips cycle and throw freely and confidently again!

What are ball players and coaches saying?

“After completing your program… he was more aware of the things that made him tight. He learned to control his breathing and control his emotions.”
~Mark’s Father

“I write you because it’s been 6 months since I started the program Breaking the Yips Cycle. Before that I was putting with a long putt and due to the ban on anchoring I switched to a short putt and started your program. The yips program has helped me a lot. I have been able to focus on what matters instead of thinking about the outcome or fearing a yippy stroke.”
~Ricardo Abogabir C. 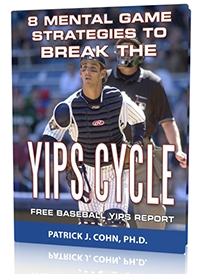